Verbotomy: Are you stuck for a word? Play Verbotomy at b.

Verbotomy, the daily create-a-word game is launching at b, Baltimore’s free daily newspaper. The game has been completely integrated into b’s website (www.bthesite.com) using the paper’s existing log-in system. Each day, b readers are challenged to invent a word to match the new definition, and vote for their favorites. Winning word of the day is published in the print edition.

The launch with the b is being promoted with the release of a new Verbotomy “movie trailer”, titled “Are you stuck for a Word?” The video features invented words created by (or for) Dan Pink (Johnny Bunko), Amy Sutherland, Kurt Vonnegut and Britney Spears — artists and writers who have all been featured on Verbotomy. The video is also a “call to action”, urging everyone to invent new words “to describe the incredibly weird things that are happening today”. And to do it, not just for themselves, but “for the whole frigging planet!”

How Verbotomy Works
Verbotomy works like a three-way cross between a puzzle, comic and blog. Every day we would publish a new definition and comic. Readers are challenged to create an invented word to match the definition, and vote for their favorite. The winning word of the day gets featured with the comic in the print edition.

Here are sample print pages from the first week: 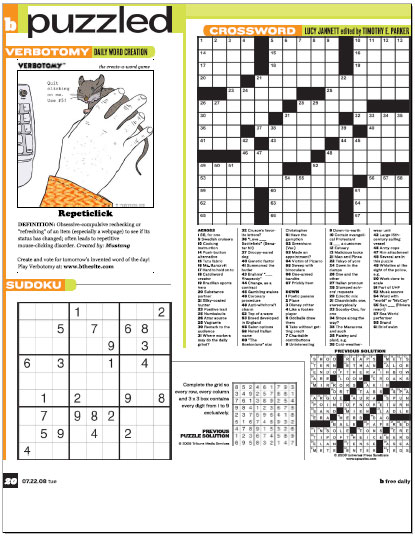 About Verbotomy
Verbotomy is the create-a-word game and comic. Every day we publish a new definition and comic. Players are challenged to create a word to match the definition, and then vote for the best. Itâ€™s creative, satirical and quirky, so it’s usually good for a laugh… And as a creative brain exercise, it’s also good for you!

Newspaper publishers use Verbotomy as a tool to build local communities and showcase cross-platform, user-generated content. The game works like a three-way cross between a puzzle, a comic and a blog and can be easily integrated into the publishers site. The online game produces daily batches of short, funny, localized, user-generated content — the winning word of the day and comic — which get published in the print editions.

About “b”
b is the new Baltimore free daily newspaper and website for people in their 20s and 30s. With its companion newspaper, b, the site is an ongoing conversation among our reporters, bloggers and readers, to provide the most complete picture of what’s going on in the area. See : www.bthesite.com

DEFINITION: v. To create an impression that you have made a positive contribution, especially when related to career activities. n. A personal mark or imprint which proves that you have done something that matters.

Colophiti: /kol-uh-fiti/ John placed his distinctive colophiti on all office collaborative work and memos to demonstrate to his boss that he had personally read and digested all the important information. Etymology: colophon (printer’s distinctive emblem, used as an identifying device on its books and other works) + graffiti (markings, tags, or initials) Created by: Stevenson0.

Worthprint: /WURTH-print/ Who will leave the greater worthprint: Foo, Kilroy or Johnny Bunko? Etymology: WORTH: usefulness or importance, as to the world, to a person or a purpose & PRINT: impression or mark; to impress on the mind or memory. As a schoolboy, in the 1950s, it was a lark to write “Foo was here!” Later on he was replaced by Kilroy. Looks like now it’s about to be Johnny Bunko’s turn. Actually, “Johnny Bunko was here!” sounds great. Created by: OZZIEBOB.

Signifiprint: /-sÉ™gËˆnÉªfÉ™ËŒpÉ¹Éªnt-/ In a desperate, but ultimately confused attempt to leave a signifiprint and make sure his chores did not go unnoticed around the house, he began initialing every bag of trash he took out to the curb. Etymology: from signifi(cant) + -print (as in footprint, fingerprint, and imprint) Created by: ErWenn.

Jobifact: /jahb-eh-fakt/ Johnny left little jobifacts around the office to look like he was busy working. He would leave papers by the printer of drafts of written work, he would save and stack his telephone messages (real and made up ones, mind you) on his desk, and left emails of his work exploits. He would often start sentences like, “You know Bob, I’ve been thinking about this . . .” or “What’s been bothering me, Florence, about the Dithers’ case is . . .” He constantly asked his co-workers if he could borrow their White-Out, extra large paper clips, or staples because he just “ran out.” Whenever a report came out that had his name on it, he would post it on the staff bulletin board and pin it on the walls of his tiny cubicle. In essence, Johnny didn’t do much. Etymology: Job, profession, place of work + artifact, a spurious observation or result arising from preparatory or investigative procedures Created by: arrrteest.

It was a tie!!! arrrteest and petaj tied for the number one spot in our Johnny Bunko Adventure! See: Petaj and Arrrteest Tie Johnny Bunko. ~ James

DEFINITION: v. To make a mistake from which the benefits of what you learned exceed the costs of the screw-up. n. An excellent mistake.

Erronebonus: /air-owe-nee-bow-nus/ To erroneously mark down the wrong civic holiday on the company calender was a mistake. To get an extra day off was an erronebonus. Etymology: erroneous + bonus Created by: Jabberwocky.

Bonerrata: /bahn-ehr-atta – bÅn-err-atta/ “She fired me!” Kevin cried out in laughter. “Really? What for?” Devon asked surprisingly. “I asked her out.” Kevin replied with a twinkle in his eye. “Huh?” Devon grunted. “Yeah, I asked her out after I accidently deleted all of the files of the Johnson report.” “Really?” asked Devon. “Yeah, she said no and she doesn’t want me to work here anymore, but she needs me to fix the situation — from home! So I will now be telecommuting Dude!” Etymology: bon, good + boner, blunder + errata, corrections of mistakes, from err, to make a mistake Created by: arrrteest.

Acerr: /ace-err/ A scientist at the 3-M company, in an attempt to make a super glue, acerred when he came up with a weak glue and used it to invent post-it notes. The scientist and 3-M went on to make millions of dollars from his acerror. Etymology: VERB – to acerr – (from to ace + to err) _____
NOUN – acerror – from ace (excellent, first rate) + error Created by: Stevenson0.

Serendumbity: /serr – uhn – DUM – uh – tee/ Felicity had a glorious gift for serendumbity; many things that might turn into disasters became successes in spite of her ineptitude in actually planning her life. Etymology: blend of serendipity and dumb Created by: Mustang. We spent a week at Verbotomy playing with Dan Pink’s Johnny Bunko and the Six Career Secrets that no one ever told you. It was a lot of fun, and we learned a lot! Like the fact that there is no plan! And that in the long run, persistence trumps talent…

And naturally we created a gaggle of funny words to describe the things we should, and the things we shouldn’t do, acccording to the Johnny Bunko Lessons. At the end of the week Petaj and Arrrteest snagged the top spots and both of them won an autographed copy of Dan’s book.

If you want, you can still play with Verbotomy with Johnny. Check out our Johnny Bunko Summary Page. It’s loaded with the links to all the Johnny Bunko definitions, comics and invented words. And if you’re inspired, maybe you’ll create a few new words to describe your career.

Thanks again to Dan Pink.

DEFINITION: n. A person who succeeds not because of their talents, but because they just won’t quit. v. To firmly believe in your talents and never give up on your goals, despite the huge obstacles, snide comments, and repeated setbacks.

Persistenator: /per-sis-ten-ay-tor/ In the office, Phyllis was called the persistenator. She worked hard and despite not having quite the flashes of brilliance and withitness as many new hires. However, she always was went about her daily duties. After 3 years waiting for the promotion from mail clerk to record filing, it took her another 4 years to make it to front desk. After spending 10 years at the job, and after much turnover in the office, she was finally promoted to office manager 6 years ago. She hoped to make the jump to mid-level management soon as she just completed a correspondance course in business administration. Etymology: persistence,the act of persisting or persevering; continuing or repeating behavior + ator, suffix indicating a person that is involved with doing what the root word is about Created by: arrrteest.

Grinderminder: /grÄ«nd-er-mÄ«nd-er/ Kendra’s stick-to-it-ness gave her the reputation of being the workplace grinderminder. No matter what the boss threw at her, she always plodded her way through each task, often learning the ropes as she went along. Sometimes she was able to do it with no problems, other times she had to start over and ask for help. Either way, everyone knew she wouldn’t quit. Etymology: grind, from grindstone + minder, a person who is paying attention to something Created by: pieceof314.

Nosensequitter: /no-sens-kwit-tur/ Sally’s philosophy was to aspire to be a nosensequitter who would never give up even if it was an unwarranted conclusion. Etymology: no sense + quit + non sequitur (illogical conclusion) Created by: Jabberwocky.

Unswervictor: /un-SWER-vick-ter/ The unswervictor’s hero was Benjamin Disraeli, who once said “through perseverence many people win success out of what seemed destined to be certain failure”. Etymology: unswerving (persistent) + victor (winner) Created by: petaj.